Dowry as I said earlier is kind of like a price tag. You hit the bull's eye when you get your target right on the money. It's quite a debated topic with a lot of laws in place to abolish the practice of accepting dowry; but that's all just in paper. In order to come into effect it's gonna take a long time. It basically means changing the mindset of a chunk of society which can be quite the challenge. 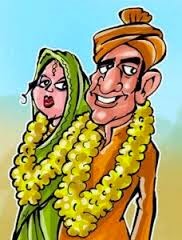 Another thing about Indian marriages or so would be the qualification of the bride and groom. If the bride is a doctor then she can only get married to a doctor. Equally important is your religion or caste. Getting married to a person not from the same caste or religion is like the biggest sin anyone could commit.If  He/she proceeds with a marriage of such sort, they would bring on themselves the shun of society and family. The family would practically disown you and kick you out. Trust me I am not exaggerating when I say disown. Its very true. They literally cut off all ties with you and act like you were never their children.
Like once I had been to this inter-religious wedding, and instead of being happy for their love, all I could hear was rumblings from all the people seated, on what a bad thing these two had done. Marriage is supposed to be a happy ocassion where you share in their joy.

And now once you get married and stuff, you might think it's all over. But hey, no way it's over. There's more to come. Here's where every possible relative or friend goes on and asks you do you have any good news? ( good news means is there a baby on the way) yeah I know what you're thinking. Gosh, it's really annoying.  Can't they just be happy with the marriage. Oh hell no, they expect you to be manufacturing out babies. Oh yeah u can't just do with one. Two or three, would only be considered  the signs of a healthy marriage.

Don't even get me started on Divorce. You aren't even supposed to utter that word. How ever abusive your partner may be, you are expected to live with it. In fact, physically abusive partners would be treated as chauvinism. But this is not so aggressively followed.

Then comes the issues for single ladies. Any young Indian girl found to be drinking might be considered a bad person. Even though you have a sip of alcohol or a mug of beer, you're an alcoholic and full of evil! Oh yeah they will be whispering behind you, "Look at that girl. No values. Her parents are to be blamed." This is more so found in reserved communities usually in south India.

And now I think I should put a full stop to it and be on my way.

Popular posts from this blog

August 19, 2014
Namaste! :) I hail from a brown family with rich Indian roots. Now that sucks. The diversity in culture and language might be good. But honestly Indian traditional customs are so narrow minded. They play a lot of importance on family values. Well, in one way that could be good and I do appreciate it but on the other hand it goes to an extreme end. I do realise that times are changing but this is not a problem that goes away so easy. No matter how modern a family you say you come from; as long as your Indian, you face the same issue. They care too much about what society thinks and mind you, Indian society is very bitchy and judgemental! Every neighbour or older person ( called uncles or aunties) play a major role in your life. You may try your best to keep them out of your life. But they ain't going nowhere. They will have a say in your life. They end up being the ones deciding where you study, who your friends are and ultimately who you get married to! This is the most ab
Post a Comment
Read more

October 29, 2014
An eye for an eye. Tit for tat. These are things that we have grown up listening to.  Many circumstances in life hurt us. People and situations can have such a bad impact on us. Some people lash out in their anger without thinking the problem through. What were the circumstances behind the lash out or the reason behind such illicit behavior. Revenge might seem like a very good option. Darkness cannot drive out darkness only light can . While watching a movie, this line got stuck in my head. I'm a person who strongly believes in this. It's always darkest before the dawn. So how ever bad a situation in your life gets, you should believe that there is light at the end of the tunnel. Same goes for those who believe in revenge. There is no need to rush off at someone who fired out at you or put you down. If you believe in revenge; it shows you are actually a weak person. It shows you are not able to withstand the downfall and rise up on your own. You are a person who w
Post a Comment
Read more

Where do you think you're heading?

August 01, 2014
As i stay up one night, my head, as usual, wanders into endless thoughts. One thought strikes me real hard. What exactly am i doing with my life? This question kept lingering at the back of my head. I am quite used  to these kind of thoughts that get stuck in my head. But this one was different. I couldn't quite wrap my head around getting my way around it.  We all live in a world where we are so caught up with getting through with each day's worries. But Hey! Slow down! Take a moment. Breathe! Where the heck do u think you're heading?   Why do you run around taking on so much worry when you don't know where you're heading to? You might think you have your future all mapped out. oh yeah you're struggling so hard : probably trying hard to get  through school, survivng university and some others; to just get a damn job with the single motto of earning enough money to live each day in a mediocre lifestyle( cause otherwise u just might end up on the streets
Post a Comment
Read more